The Cornelia Battery, which consisted of two 6 inch quick firing naval guns (since dismantled), was constructed in 1939 to cover the northern entrance of Table Bay to the Blaauberg Channel.

It is not clear which model of weapon was used, however the most commonly used type for coastal defence was the Marks VII and VIII. The weapons were designed in 1899, fired a 50.8 kg projectile at a maximum range of 16.340 km at 20 degrees of elevation. Separate propellant bags were used. Between 5 and 7 shots could be fired per minute.

A flight of stairs provides access to underground magazine about 10 meters below surface. The magazine is surrounded by a ground water control tunnel with a sump located close to the entrance of the magazine. Steel door leads to magazine interior where steel shell racks are still in place. Also present is shell hoist tunnel and ventilation shafts leading to mushroom ventilators on the surface.

Coastal artillery was disbanded in 1958. 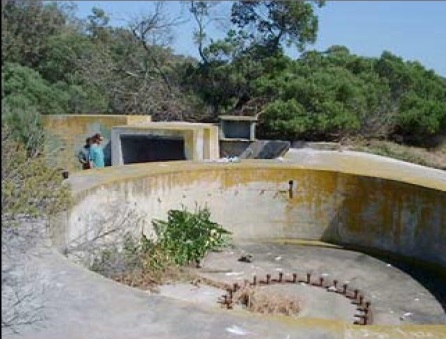