The Leper Graveyard is a site where inhabitants of the island, who died isolated from their next of kin and homes on the mainland were laid to rest.

The graveyard is only a small portion of the leper graves that was maintained over the years. Most of these graves are easily identifiable and have formal headstones.

The larger leper cemetery contains thousands of graves. The vast majority of these graves are unmarked while many others are marked with simple shale headstones without any inscriptions. It has been shown to occupy a large portion of land between the logistics offices extending as far as the prison and possibly as far as the Kramat. Outlier graves have also been found in the vacant land to the south of the prison.

The sequence and patterns of burials are poorly understood. It is quite possible that the original VOC burial ground was the starting point of the lepers' cemetery, which grew very rapidly during the 19th and early 20th centuries. 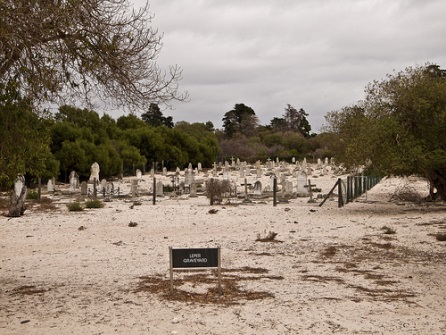